This combination of herbs in FemCo contains many compounds including the monoterpene glycoside paeoniflorin, steroidal saponins (such as shatavarin-I and dioscin) and dibenzocyclooctene lignans. 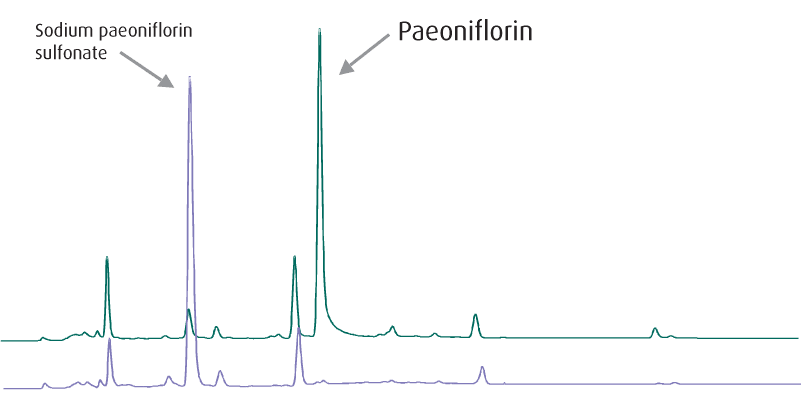 Paeonia lactiflora, or White Peony, is a widely used herb in Traditional Chinese Medicine and as is common in this modality, herbs are often treated in many different ways to produce a more palatable or efficacious product. The important plant part is the root, which as it occurs naturally is approximately 1 to 2 cm round cylindrical roots, varying in color from off-white to pinky-brown. Much of the Paeonia root which used in commerce is in the form of pure white root slices, which have been treated by sulphiting agents to preserve the plant material’s appearance, by reduction of enzymatic browning. This treatment also has the side effect of reacting with the main bioactive compound from Paeonia (paeoniflorin – a complex monoterpene glycoside) and forming a stable new compound sodium paeoniflorin sulfonate. This is readily seen by HPLC where the peak from paeoniflorin is absent in the herb which has been treated by sulphiting (bottom trace), whereas it is the major component in the untreated herb (top trace).