The compounds in St John’s Wort have been used traditionally to:

St John’s Wort 1.8g contains the naphthodianthrones hypericin and pseudohypericin (hypericins), flavonoids, phenolics and other compounds. This product is standardized to contain 900 mcg of hypericins and 18 mg of flavonoid glycosides per tablet to ensure optimal strength and quality. 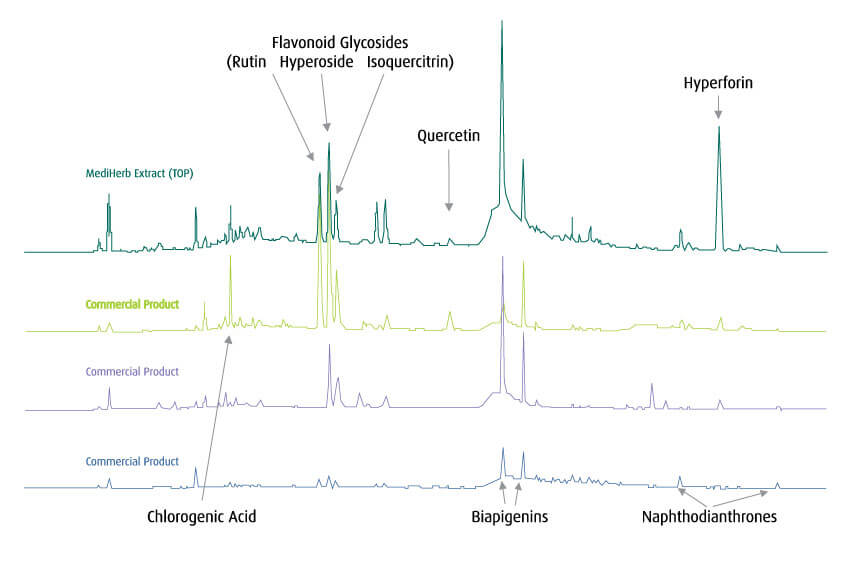 St John’s Wort is comprised of a wide range of phytochemicals of which the naphthodianthrones (consisting mainly of hypericin and pseudohypericin) are characteristic, while several other constituents are found across a very wide variety of plant species; e.g., chlorogenic acid, flavonoids and biapigenins.
An animal study has shown that hypericin administered with flavonoid glycosides caused an increase in the bioavailability of hypericin. St John’s Wort extracts containing the flavonoid glycosides but devoid of hypericin and hyperforin have been shown to be pharmacologically active in model systems. Additionally, extracts devoid of hyperforin have been proven effective in clinical trials as have extracts containing hyperforin. In the graph, all extracts contained the same level of napthodianthrones (hypericins), however a wide range of variation was shown for the other constituents when analyzed by HPLC – some extracts having very low levels of all the phytochemicals you would expect in a good quality extract of Hypericum perforatum. MediHerb recognizes the importance of all the other constituents, particularly the OPCs and flavonoids and tests all its products using the techniques which allow the identification of these components.