Six tablets per day, or as directed. Store in a cool, dark place. E-Z Mg is made from two key ingredients – Swiss chard (beet leaf) and buckwheat – both grown on our sustainable and certified organic farm in Wisconsin. These plants, high in magnesium, contribute to the multiple forms of magnesium available in E-Z Mg, helping take the guesswork out of which kind of magnesium to take.

The naturally-occurring magnesium in E-Z Mg is not expected to contribute to gastrointestinal side effects that are common in other forms of magnesium supplements.

What is the Benefit of Multiform Magnesium (Mg)?

The best source of magnesium is naturally-occurring and obtained from the diet. Various forms of magnesium make use of different uptake sites in the gut1 with 40% of magnesium absorption taking place throughout the intestines.2

The plant-based magnesium in E-Z Mg may be absorbed by the body the way nature intended.

Why is There a Gap in Dietary Magnesium Intake?

The Standard American Diet (SAD) is high in processed foods and carbohydrates, low in vitamins and minerals. This inadequate daily intake of plant materials helps contribute to magnesium deficiency in more than 50% of the population. 3,4 Data also suggest that produce – especially vegetables – has experienced a decline in mineral content over the last century.5

Signs of low magnesium may include^:

^E-Z Mg may not address these concerns and is not intended to diagnose, treat, cure, or prevent any disease.

E-Z Mg consists of extracts of two key ingredients: organic dried Swiss chard (beet leaf) juice and organic dried buckwheat (aerial parts) juice delivering 70 mg of elemental magnesium. The 70 mg of magnesium (approximately 17% of the RDI) would be sufficient to bridge the magnesium dietary intake gap for around 70% of the population. The remaining 30% (composed of individuals at the lowest end of dietary magnesium intake) are advised to increase their intake of plant-based diet along with E-Z Mg.

A Higher Standard of Support

A recent animal study has shown that E-Z Mg is able to elevate free ionic Mg in the cerebrospinal fluid following 14 days of oral supplementation.6 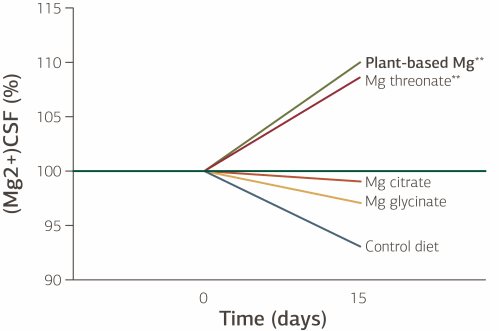